From Mongolia to Cambodia

In November 2010 FEBCambodia welcomed onto the team an Australian missionary couple, Larry and Barb Podmore. Larry is serving as Administrative Director, and Barb is helping to develop community focus programming. 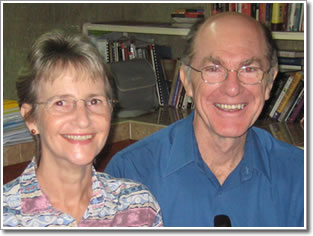 Larry and Barbara (“Barb”) Podmore are missionaries with FEBC Australia. They arrived in Cambodia in November 2010 to join the FEBC team here for a two-year assignment.

As Administrative Director, Larry’s responsibilities include mentoring the management team, helping to set up policies and systems, and guiding the staff through the process of planning for the future.

At the end of his first month with the team, Larry says he is greatly encouraged by their commitment. “Staff here have a real heart to reach out to Cambodian people!” says Larry Podmore. “That makes coming here really exciting, because if people have this heart attitude and if you can then put a track down for them to run on, great things can be done!”

Larry and Barb have four grown-up children. Larry was a university lecturer in engineering before he and Barb joined FEBC in 1986. They first served in Saipan, then spent 18 years in the Philippines where Larry became Consultant to the FEBC Philippines President. In 2008-2009 they were in Mongolia, Larry standing in for the director there while he went on sabbatical.

During her time in Manila Barb volunteered with Precious Jewels, a ministry which provides wholistic care and support for children at risk. She will be continuing this involvement. With FEBC in Mongolia she helped to facilitate community focus programming, and she will be helping to develop this same aspect of ministry in Cambodia.

The Podmores have found a house not far from the FEBCambodia office and say they are settling in well to life in Phnom Penh. “And we love Khmer food!” adds Barb.