He met Jesus through Voice of Love

Chou came to know Jesus through listening to FEBC’s short wave service Voice of Love, and for two years FEBC was his only source of teaching and fellowship. Now he pastors his own church. 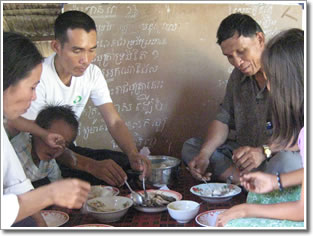 Chou is a pastor and a keen listener to Family FM. But he first met Jesus through FEBC’s short wave service Voice of Love.

In 1993 Chou was working as a pharmacist with the army in Banthey Meanchey close to the Thai border. One day while tuning his radio he found Voice of Love. He listened intently for three months….. and then gave his life to Jesus.

Voice of Love was Chou’s only Christian fellowship for the next two years! Then he came to Phnom Penh, joined a church and was baptized. In 2003 he moved to Kandal province and started a church in his house. Today it has 25 members and he pastors five smaller groups in the neighborhood. He still practises pharmacy, and also does some pig farming.

Pastor Chou has been listening to Family FM ever since it went on air in 2003. He tells his church members to listen too. He says that the radio programs help him greatly in his own ministry. “Family FM is my pastor!” he says.