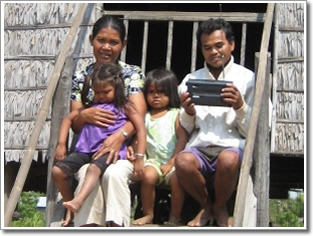 "Family FM not only helps us learn about God’s word, it helps us with our daily living."

- a listener in Svay Rieng province

The Christian radio mission Far East Broadcasting Company (FEBC) has been broadcasting to Cambodia via short wave from the Philippines since 1957 – years before the world associated Cambodia with the infamous ‘killing fields’.

Samoeun Chan Intal, a Cambodian working with FEBC in the Philippines, returned with her Filipino husband to Cambodia in 1993. Together they opened an office and studio and began training Khmer people in radio programming, and making plans for a local station. Their aim was to share the love of God through programming which affirmed Cambodian culture and upheld family values.

March 2002 saw the launch of non profit Family FM 99.5, broadcasting from FEBC Cambodia’s own station on the outskirts of Phnom Penh (Phnom Penh Thmey) on a 500-watt transmitter. By 2004 Family FM’s signal strength had increased to 10kW, potentially reaching half the country’s population.

Meanwhile FEBC Cambodia known as FEBCambodia has continued to broadcast its SW service Voice of Love, daily reaching across the whole country for an hour morning and evening.